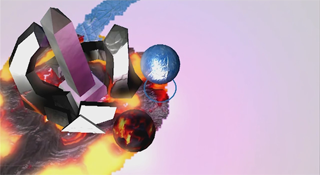 What I did Contribute

What I did not contribute

ColorIt is a real time tactics game for two to four players in splitscreen-mode. Players use a Microsoft XBox 360 Controller for Windows to control their cursor across the map. Pressing the A-button will mark the area below their cursor with each player’s respective color. Holding that same button, players can paint paths and figures onto the neutral map. Paths that are connected to their own base building will gradually be conquered by their color. Using this mechanic, players need to first mark and then conquer strategic points that are scattered across the map. As long as strategic points are held by a player, they will contiguously increase that player’s victory score by a fixed amount per time quantum. The player that first manages to completely fill their victory score wins the game.

Players can paint across opponent’s paths and by doing so, cut off their supply. Any territory that is not connected to a player’s base building by at least one path will gradually deteriorate and finally vanish unless it is connected again.

Read my post-mortem analysis of the ColorIt project!